I have an ongoing interest in snowy owls as a subject for sculpture. The nearby Crane Estate is a winter habitat for them, so local people, even non-birders, recognize and relate to them. Young children, who are generally not interested in gallery-going, will stop and look at representations of snowy owls.

Birds in general are challenging to sculpt. Snowy owls in particular keep far distant from humans. They make movements faster than the eye can see. In flight they are high in the air, and not viewable from above. While they have bones and soft tissues that correspond to those of humans and other vertebrates, birds cover these with streamlined, aerodynamic surfaces. It's just very hard to fasten on their shapes.

My owls have, so far, been of stonework. I have fixed on the idea of making one in flight, but rocks don't lend themselves to that very well. I've been experimenting in epoxy resin and fiberglass, which seem to be just the thing for the purpose – except that my skills with it are only those of a beginner, which is what I am. Well, the craft is seeming very learnable, and mistakes can be fixed – that is why they use it for auto and boat body repair, after all. In the picture, you can see through the surface to the buried odds and ends of pink and light blue styrofoam, dark glue and other temporary supports. You should imagine it painted white, except for its beak and eyes.

The picture is of a half sized model. A full-sized one, which is what I have in mind, has a wingspan of five to six feet. Snowy owls are big birds. 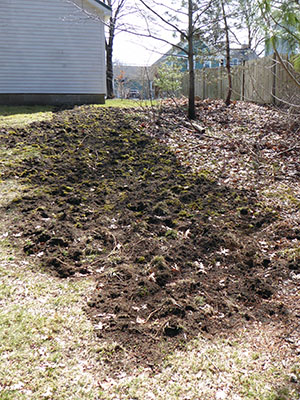 The end of March has been mild. The ground has thawed. There is no snow or ice around to be seen. There are no puddles or noticeable mud. There hasn't been a major winter storm wreaking broad devastation on trees. There are a few small branches down, but that's it.

Every year since I have owned my house, I have cleared an area of random wild growth, and sown it as lawn area. I am not fixated on grass as the only possible or even ideal solution, but I have found that invasive species quickly penetrate into other ground covers. The only way to control that voracious jungle is mowing, which quickly narrows the options and brings us back to grass. (I do mix in some clover. Clover coexists nicely with grass and fixes nitrogen from the air, obviating the need for applied fertilizer.)

The turned ground shown here is an area that was heavily shaded by a Norway maple, with a dense growth of moss underneath. The maple went down last year in a storm, affording new sun to growing things that were choked of light.

The totality of all of the tasks ahead of me for the coming warm months looks, thank heavens, manageable, in stark contrast to last year, when it was overwhelming. There are no doubt events ahead that I haven't planned on, but – barring very bad luck – there will be time to do what has to be done and then to smell the flowers and daydream. 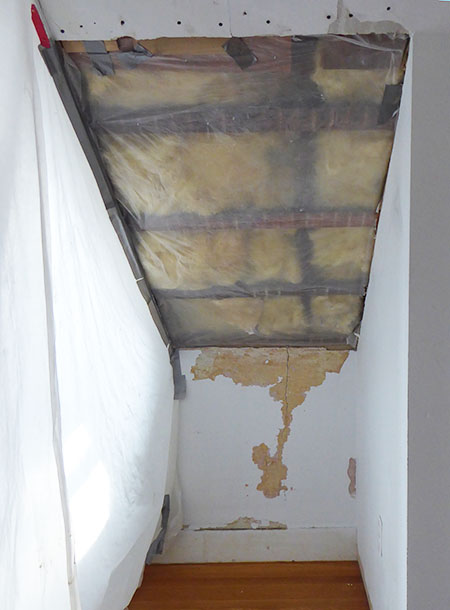 Most of us keep lists, usually mental and haphazard, of things that we should do, one of these days. Some things fall to the bottom, or fall out, because they aren't actually important, or because we just really don't want to do them.

My own list of dreaded tasks has included household maintenance jobs that are simply disruptive, preventing ordinary use of key areas of the house, or creating storms of filth and dust. Just about the oldest item has been repair of loose section of ceiling below a former roof leak. The initial phase of the work involved old plaster, coal dust, blown-in cellulose insulation, and rodent droppings falling from above in a fully furnished room of the house. Yuck. I built a tent and took down over the course of several days, pretty much handful by gloved handful, stuff that could have been pulled out in five minutes – but leaving in its wake a sanitary disaster, had I taken that approach. That part of the work is now complete, saints be praised, with its vapor barrier, which will block any futher fall of dust and other particles.

Well, it feels good to have the dirty part done, and the work going forward should be fairly clean and much more rewarding.

There were other such tasks I took on, refinishing a few worn areas of oak flooring, and installing lumber shelves in the basement. They weren't yippee-whee fun, but it is very satisfying to have them done. And the list has grown complete just as winter is fading. That conjunction of milestones does put a smile on my face, I must say. 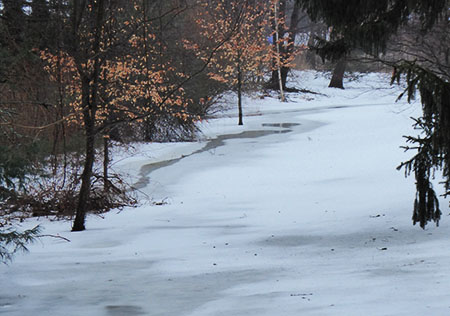 In some years, I have a vernal stream as the snow pack melts over the saturated ground above where I am. This year I have a very unusual and distinct winter stream. We had a significant snow not long ago, and in the last twenty-four hours a sharp thaw and ¾ of an inch of rain. The ground isn't saturated, but it is frozen.

This material first appeared on February 3 as a guest column in the Ipswich Local News. 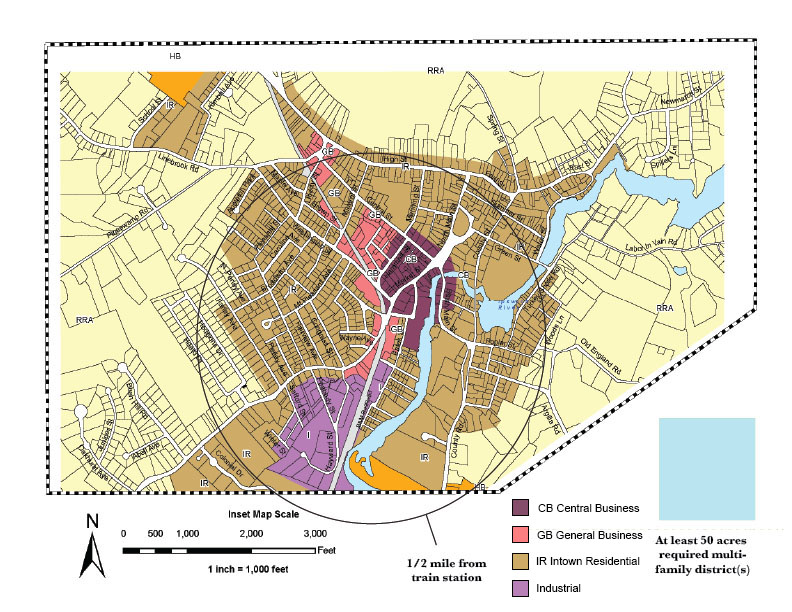 In January of 2021, a new Section 3A of Chapter 40A of Massachusetts General Laws went into effect, requiring designated MBTA communities to provide at least one district where multi-family housing is permitted as of right. The law provides that the district be “of reasonable size … not more than 0.5 miles” from an MBTA station, with “a minimum gross density of 15 units per acre.”

The Department of Housing and Community Development (DHCD) has drafted regulations to implement the law.

These require an appropriate zoning district of at least 50 acres. For Ipswich, the district will need to allow 971 multi-family units. The proposed regulations are open for comment through March 31.

The law does not mandate the creation of housing. In fact, central Ipswich is already heavily built out. Future growth will continue to be constrained by economic, historic, and conservation requirements, prior development, and the difficulty of adding off-street parking.

A preliminary count of existing dwellings within 0.5 miles of the Ipswich train station estimates about 1,300 units, about 750 multi-family units, and 550 one- and two-family units. The draft rules do not take existing housing into account.

Although the proposed regulations do not require that all the area within 0.5 miles allows a density of 15 units / acre, at least 50 acres (about 1/10th of it) must. For Ipswich to reach the required total of 971 units, it would have to increase the density to 20 units / acre or the total area to 60 acres.

Ipswich already allows multi-family housing in much of its central areas but generally requires a special permit. The central business and general business districts together comprise about 50 acres.

Ipswich zoning and its Community Development Plan currently focus on this area for future development.

The new zoning requirements must allow multi-family housing, but that may be subject to other density restrictions.

Specifically, zoning may set a maximum floor area ratio (FAR) — the building floor area / lot area. For example, an acre with 15 two-bedroom units of 1,200 square feet each has a FAR of 0.41, well within the range of existing neighborhoods.

What options does Ipswich have? It is realistic to expect that the governor and legislature will leave the recently enacted law as-is with requirements for new zoning regulations to allow multi-family housing.

It seems fair and reasonable to ask DHCD to consider adjustments in specifics of its proposed guidelines to take existing dwellings into account.

Meanwhile, the town must consider options for implementing the regulations as proposed. These might remove special permit requirements in downtown areas at the same time as refining restrictions on density, such as FAR limits.

There is substantial agreement between the state and the town on goals in concept. Where ideas on implementation vary, the town will need to work at advancing specific plans — perhaps with DHCD agreement to refine its proposed regulations to credit work already done, perhaps without. 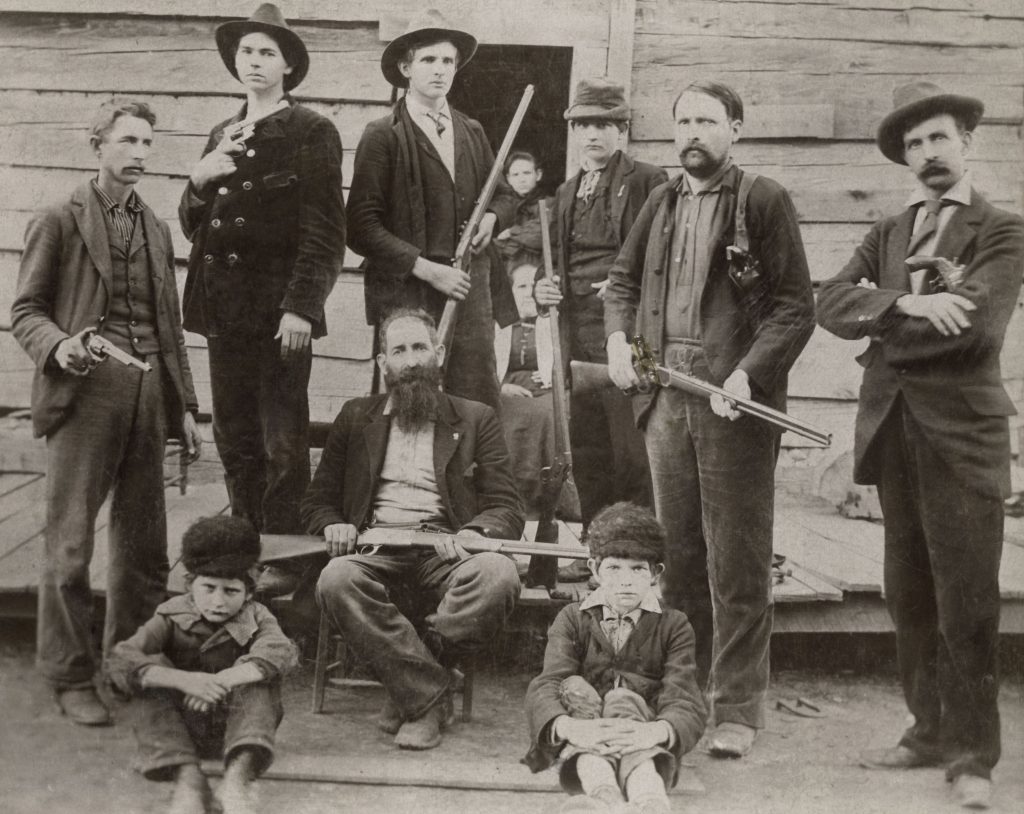 I am fascinated by the movement of our society towards polarized political views, especially when the viewpoints from one pole are may not be internally self-consistent, but are consistent in being against the views from the other pole. If there is evil – which there must be if there is good – our human minds prefer to take the evil as external. In the absence of an ongoing foreign conflict to supply pre-packaged, off-the-shelf villains, we may seize on the expedient of making bad guys out of each other.

I recently found a very enlightening study in Nature.

Examining political content, we find that Reddit underwent a significant polarization event around the 2016 US presidential election. Contrary to conventional wisdom, however, individual-level polarization is rare; the system-level shift in 2016 was disproportionately driven by the arrival of new users. Political polarization on Reddit is unrelated to previous activity on the platform and is instead temporally aligned with external events. We also observe a stark ideological asymmetry, with the sharp increase in polarization in 2016 being entirely attributable to changes in right-wing activity.

As Winston Churchill observed, the veils of the future are lifted one by one, and mortals must act from day to day. For starters, it is reasonable to anticipate that the future will be like the present, only longer.

For humankind, there are some currents whose direction seems sobering. The compelling collective focus of the moment is the viral pandemic. At the beginning of 2022, the description "COVID Nineteen" is ironic and oxymoronic. One remark in recent news seems to put it rather well: we need to "learn to live with COVID." The national and world economies are lurching along, encouraged by massive injections of currency. The disruptions in discretionary spending and global supply chains have non-economic causes in tangible health threats, however, which will not go away with increases in the money supply. Meanwhile, the distribution of added assets and spending power is not even across all classes and sectors of society, or from one moment to another, inevitably leading to disparities and increased pain for some, certainly without the predictability and security that the humble and the mighty both crave.

This is to say nothing of climate change, which many very responsible and well-informed people say is a greater, though less immediate, threat than the virus.

– Is there a bright side to all of the circumstances of our society and planet? – I see bright moments and events. What lies ahead? – I don't know the future, any more than anyone else does.

My own life is much more under my own control than the affairs of the planet, and is going well. Last year was an overwhelming one for me much of the time, between my own (over-) ambition, some unfortunate combinations of external circumstances, and an apparent decline in my overall functional status. The health issue is now resolved, and external circumstances will be no more or less under my control than they have been. This leaves me with my own ambitions to shape. I am feeling comfortable and happy with the prospects.

– And, for the present, I will revert to wearing a mask in public indoor spaces. It's not a big deal, and it's the responsible thing to do.